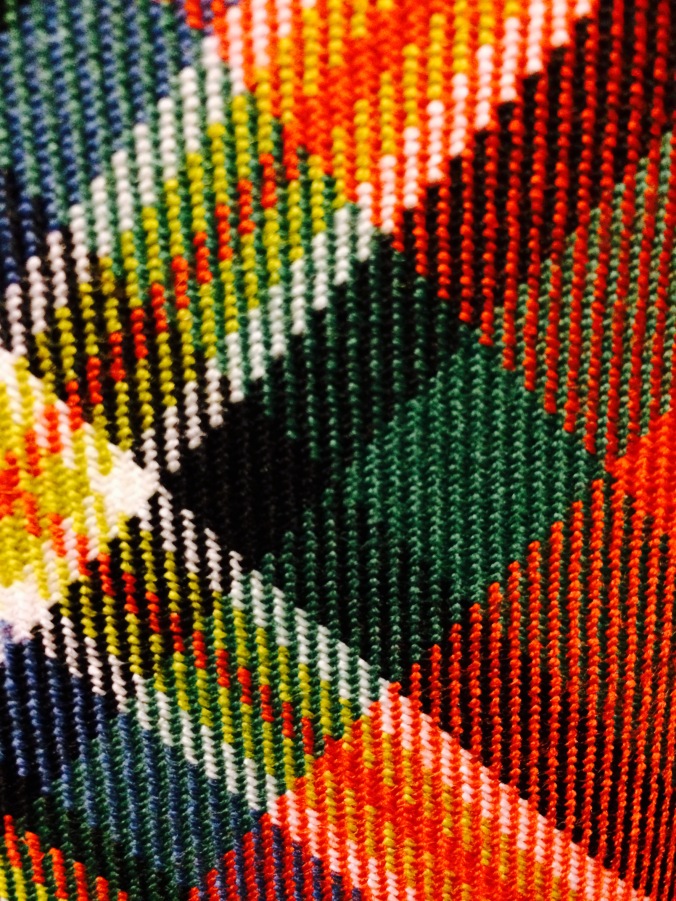 The first prosthesis I ever received had a socket with a vaguely skin-toned hue to it. It was not an aesthetic triumph. But it wasn’t supposed to be. I had been an amputee for less than 8 weeks. My prosthetist informed me that I would receive a permanent socket a few months later after the size and shape of my limb stabilized. At that time I could hand-pick something specific for the socket.

The thought of being able to customize my prosthesis with whatever I wanted laminated over it was exciting for a guy who (at the time) had never gotten a tattoo or worn anything more daring than an occasional linen sport coat. As I mulled over my options, I remembered that I had a few square yards of our family tartan lying in a trunk in my attic. The McGill tartan is a predominantly red/green/yellow explosion that looks acceptable only two days out of every year: December 24th and 25th. But now, down a leg and thinking of how to decorate my socket, the McGill tartan finally became relevant.

My second socket left the tartan behind in favor of the U.S. men’s soccer team’s jersey, which at the time was a horrific simulated denim with white stars across it. What then followed, to the best of my recollection, was a series of superhero-themed sockets: Batman; Spiderman; a high-tech looking Superman logo; the Fantastic Four; The Avengers; Ironman; and Captain America.

I used to think that I whimsically selected socket designs based primarily on which franchise was then ramping up at the local cineplex. But as I stared at some old sockets lying around my house over the last few weeks, I began to reconsider that assumption. What if the underlying selection criteria were more subconsciously and psychologically based? The more I considered it, the more I found that explanation plausible.

Why would I ever choose the McGill tartan for my first permanent socket? All my life, the impossibly bright mashup of colors had been a punchline when my father donned his tie and my grandfather his (gulp) pants during the holidays. Even today, I have a McGill tartan tie in my closet (photo above), unworn since I received it. Neither aesthetics nor a positive historical/sartorial attraction to the nauseatingly vibrant colors should have led to my decision.

I have concluded, in retrospect, that out of the universe of possible options I chose this previously locked away swatch of cloth because it was the McGill tartan. It defined me, even with all its Yuletide garishness. It was a personal statement about reestablishing my identity. Never mind the fact that who I was looked suspiciously like the aftermath of a large Italian dinner seen while staring into a toilet bowl after a touch of food poisoning: the McGill tartan socket was my first post-accident stake in the ground when it came to showing people who I was.

In the year after my accident, I began coaching the same soccer team that I had previously played for. Soccer had been a big part of my life through high school and I came back to the game in an adult league in my mid-20’s. My  identity had always been impossibly and delusionally entertwined with my belief that I was a remarkable athlete. When viewed through that lens, the decision to select the U.S. men’s soccer team jersey as my second socket seems not only unremarkable, but inevitable. “Look – I’m still a soccer player [athlete] [normal guy]!”

As the newness of being an amputee began to wear off, I then went down the Marvel/DC socket wormhole. What does every superhero have? An origin story; a seminal event that defines who and what they are. For Superman, it’s the destruction of his home planet and the fact that he’s an alien living among earthlings; Batman arises out of the ashes of his parents’ murder; Peter Parker gets bitten by a radioactive spider; the Fantastic Four are exposed to cosmic radiation that fundamentally alters their biology; the Hulk is what’s left after a scientist gets exposed to what should be a lethal dose of gamma rays; Ironman (in the most recent movie trilogy) is born out of the trauma of a missile that leaves metal fragments on the verge of shredding Tony Stark’s heart but for the miniaturized arc-reactor technology that he incorporates into his body (and that ultimately powers his exoskeletal cyborg suit); and Captain America volunteers to become a (highly successful) lab experiment before getting frozen in Arctic ice for a generation.

Every one of these individuals emerges from the transformative experience stronger, more powerful, more remarkable than they were before. To a young guy who had walked into the middle of a road on a snowy night and woke up in a hospital bed two days later with virtually no memory of what had transpired in between, I suspect these stories subconsciously resonated with a unique acuity in the years following my accident.

Comic books and movies have been informing us for the last 65 years that the survivors of random, life-changing events morph from nerds, weaklings, or at most, ordinary people, into individuals who change the world. It’s a well-established mythology that’s so omnipresent we tend not to think about it.

As I look back on the superheroes who have graced my socket for the better part of 17 years, I have the sneaking suspicion that my attraction to them lay in more than how damn cool they look. As a person obsessed with tricking people into not noticing I’m an amputee, I navigate the world with an alter ego: the prosthetic-wearing Dave McGill that (hopefully) no one realizes is an amputee unless I choose to take off my mask. (Less colorfully described as “wearing shorts.”) Similarly, I construct my life around the conceit that I’ve emerged from my accident stronger and better than I was before. (“I am Ironman.”)

Perhaps this is an example of me creating a retrospective narrative to make random past decisions appear more logical. But then again, maybe the tartan was more than just a tartan.

One thought on “the (non) accidental tartan”