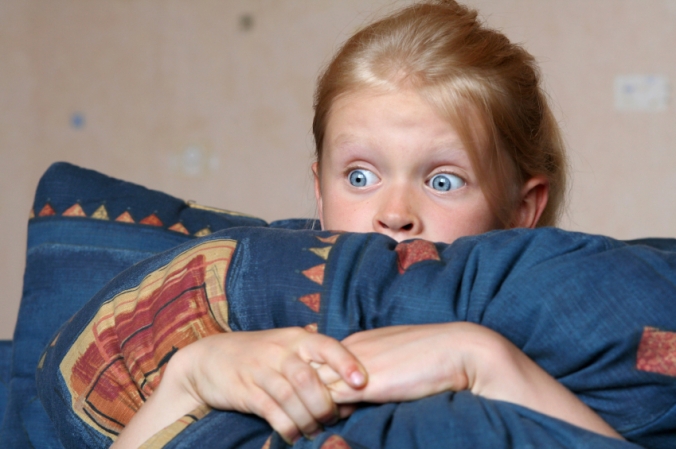 There’s a one-legged man who authors a weekly blog. He has three kids: two boys and a girl. The daughter’s almost 9. She’s tough. Tougher than her brothers. She gets hit or knocked down in public and she doesn’t cry. Never. Has always been that way.

She’s the only one of the children who’s passionate about sports. She spends 4-5 days a week in a huge gym training for an elite competitive cheer team. Her time there consists of alternately getting thrown in the air and caught by others, throwing others in the air and catching them, or racing across the gym floor uncorking different combinations of flips and tumbles of increasing complexity the longer she’s there. She loves it.

But at the same time, she’s terrified.

After learning a new move and seemingly mastering it, she inexplicably (in her own words) “loses it.” The tuck that she had yesterday? Gone. The multiple back handsprings she threw casually last week? No mas.

This paralyzes the girl, envelops her in all-encompassing anxiety. It begins the night before practice with an innocuous question: “Who’s driving me tomorrow?” It escalates the next morning when she tries to pin down the exact time of departure for the gym. By the time she gets out of school, she’s in full-out battle mode, shouting, negotiating, pleading that she should be permitted to skip the mandated practice.

Watching the pattern not only repeat but intensify, the one-legged father sat down with his daughter on a Sunday night as the terror swept over her. He lay across her bed while she sat, hugging her knees with the sheets pulled over her, and admitted to him for the first time (ever) that she was scared.

“I don’t have it anymore. If I go to practice and I don’t have it the coaches will yell at me [not true] and I’ll feel bad [embarrassed].” As the conversation continued, she opened up a little more. “When I can’t do it I get disappointed with myself. I feel like there’s a spiky ball pressing on my brain because I’m disappointed.”

The one-legged father tried to listen without interrupting, a near-impossibility given his belief that he has All Answers to All Things. He remembered the time as an 8 year-old two-legged boy that he threw a rock at a neighbor who was taunting him. The rock missed the boy but hit the blue car behind him: Mr. Frank’s car. The neighbor immediately shouted, “I’m going to tell on you,” and raced to Mr. Frank’s front door to tell the old German. The two-legged boy ran into his house, up the stairs, and into the safety of his bedroom. He peeked out his window and saw the neighbor speaking to Mr. Frank and Mr. Frank walking over to his car to assess the effect of the battery committed against it. He imagined the awful consequences of his actions.

The boy’s mother quickly divined that something was amiss at dinner that night. The boy’s already failing facade crumbled completely, the words spilling out as he revealed The Tale of the Rock. His mother had him recount the story to his father when he returned home from work, leading to a prep session at the kitchen table for what was about to transpire next.

“I’m Mr. Frank,” his father said. “What are you going to tell me when you come over?”

Confused at first, then anxious as he realized what was about to happen, the boy stumbled through a brief statement with help from his father. He cobbled together a script of admission and penance while simultaneously (and unsuccessfully) trying to negotiate his way out of the face-to-face meeting.

And so it came to pass that at 7:30 in a summer evening, with dusk starting to fade into night, the boy found himself staring woodenly at Mr. Frank’s cheap metal screen door, his father’s hand on his shoulder both for support and to prevent his imminent flight. Mr. Frank, who looked 14 feet tall with yellow teeth and a wifebeater threatening to give way under the pressure of his gut, appeared before him.

“My son has something he’d like to say to you,” said the father. And the boy, looking squarely at the place that Mr. Frank’s belt presumably rested underneath all that flesh, unleashed a torrent of barely audible words. “Mr. Frank I’mverysorry I threw a rock and accidentallyhityourcar and if there’s any damage I’llpayforitmyself.”

Mr. Frank paused for a moment and the boy felt his entire life hanging in the balance. He was only 8, but he could feel the vast hole that would swallow his existence up yawing in front of him. Mr. Frank opened his mouth. And miraculously, the hole closed. Mr. Frank related that he had waddled out to his blue Oldsmobile Cutlass to check it for damage and had been unable to see anything – not a single scratch.

It didn’t compute. The boy couldn’t figure it out as he walked home, barely registering his father saying that he was proud of him for facing up to his responsibilities. How could all of the fear, all of the anxiety just … disappear?

The one-legged father shared The Tale of the Rock with his daughter. He said, “It’s ok to be scared. But you can’t let the fear prevent you from Doing What You Have to Do.” She would have to go to practice on Monday, but facing up to what terrified her, staring at it without running away was the only objective.

Like that night in the kitchen 37 years ago, he had his daughter rehearse speaking to her coach before practice about what was going on inside her head. She presented different response scenarios. They rehearsed those also. By the time they finished, it was 10 o’clock and she was yawning.

“What are the 2 things you’re going to do tomorrow that will make your day a success?” he asked her. She responded wearily from her pillow, “Going to practice without freaking out before.”

The one-legged father picked up his crutches and hopped to his foot. “Goodnight, Caroline,” he said. And he lay in bed till midnight, thinking about Mr. Frank as a kid, losing his leg as an adult, and overcoming fear, one tiny step at a time.