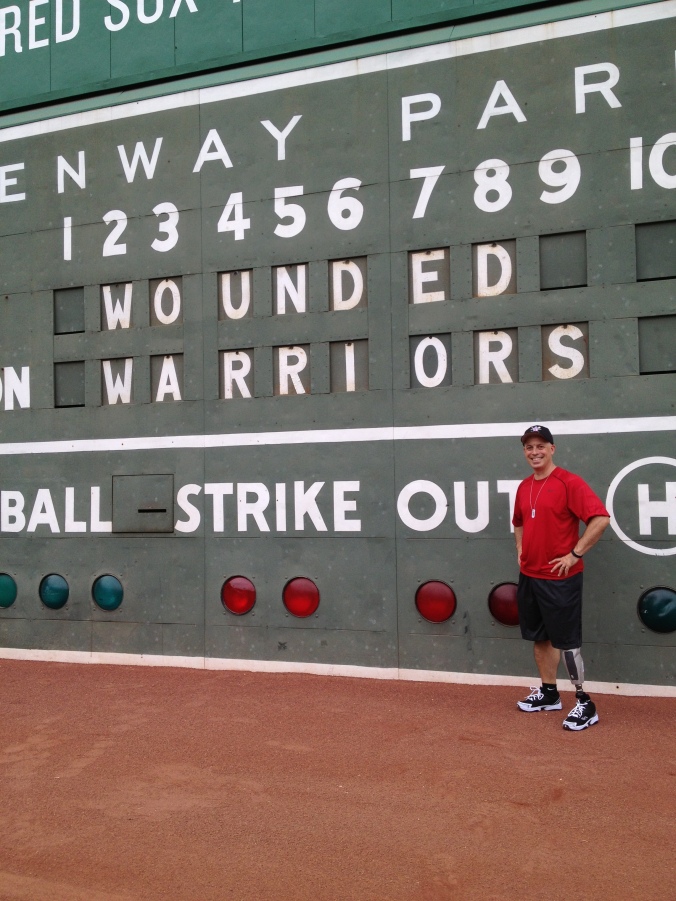 Yesterday, I had the honor of being 1 of 4 umpires in the Wounded Warrior Amputee Softball Team’s game against the Boston Marathon first responders at Fenway Park. With that backdrop, the Top 10 List.

The primary luxuries available to the men in blue appear to be (1) access to an unfathomable amount of Bazooka
bubble gum and sunflower seeds, (2) access to tons of disposable razors, and (3) a framed photograph containing the black and white headshots and names of every Major League umpire, presumably so that they can figure out who they are if they forget.

9: I’m not so sure about the Red Sox BIS department

Players in the locker rooms can access WiFi by punching in the appropriate password. I took a photo of the paper
taped to the wall with the password in the visitors’ locker room. Let’s just say that it isn’t the most crack-proof set of characters ever assembled.

8: everything’s better in the big leagues

I’m a lifelong Red Sox fan, so walking down the tunnel to the steps and seeing the field unfurl in front of me was one of the seminal events in my life. A quick scan of the memory banks leads me to the following list-within-a-list, The 5 Coolest Things That I’ve Ever Done:

5. Watched my daughter get born. (Sorry Caroline – you were number 3. Super cool and all, but I’d done it
twice before already.)
4. Watched my second son get born. (Sorry, Jackson. Same note as above. Done already.)
3. Saw Green Day live earlier this year (yes, they’re actually that good).
2. Watched my first child get born. (Cooler than marriage because you’re doing it with your wife (like marriage) and it additionally introduces a new person into your family..)
1. Umpired a softball game at Fenway Park.

After the game, we returned to the umpires’ room, which had 2 boxes of relatively cold pizza on the small circular table waiting for us. Even cold Boston pizza tastes better. Just because it’s the bigs.

7: don’t you dare give anything less than 100% against the WWAST

After the first responders jumped out to an early lead, the WWAST quickly started piling on the runs. Between the 2nd and 3rd, innings, the WWAST’s starting pitcher, Todd Reed, approached a particularly muscle-bound first responder near third base, and quietly told him (I’m paraphrasing), “You guys better not be taking it easy on us. We’d rather get our asses kicked then win because you guys aren’t going all out. You better give us everything you’ve got.” Mr. Muscle looked at him, seemingly confused. (Likely because, contrary to Todd’s suspicion, the first responders were going all out … and still getting killed.)

6: salt & pepper-flavored sunflower seeds aren’t as good as salt only

When I was in college busy warming the bench on our varsity team for 1 year, I became quite adept at putting huge numbers of sunflower seeds in my mouth, shelling them and spitting out the salty exteriors without choking. Armed with this critical and relevant experience, I took a sleeve of “major league seeds” from the umpire’s room and popped about 400 into my mouth when the game started.

I expected salty seeds. I got salt and pepper.

Pepper’s spicy. That’s what I learned. 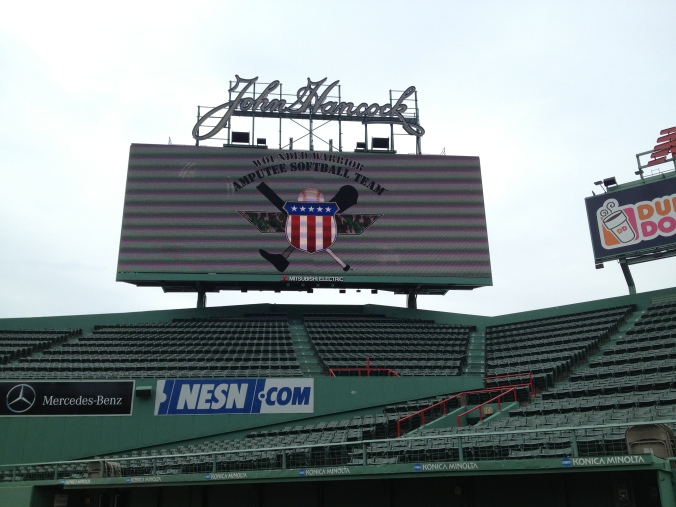 WWAST Logo on the “Big Board”

To get on the field, a Red Sox employee made us sign a waiver. Another umpire, Matt, who works with me, was getting dressed and asked me to tell him what it meant as he laced up his shoes. I replied, “Any injury up to and including death isn’t the fault of the Boston Red Sox.” This would prove to be highly relevant a few hours later. 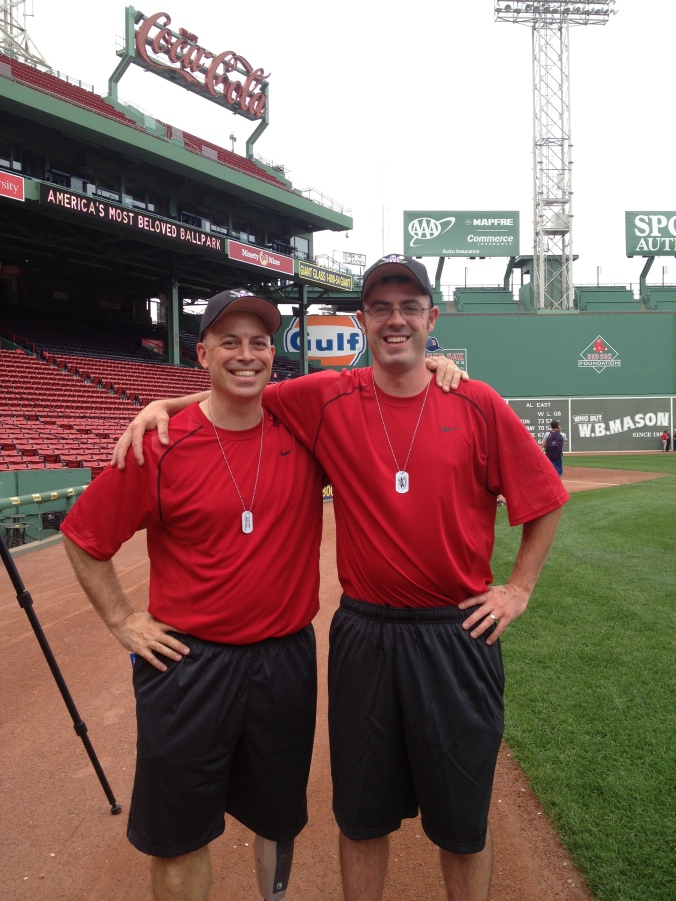 Dave and Matt, before Dave realized that signing the waiver might have been dumb.

The WWAST’s first baseman, Josh Wege – the same Josh Wege who earned MVP honors at this year’s MLB All Star Celebrity Softball Game – hit a tracer that, had it been 24 inches higher, would have killed me. (That’s not a joke. My wife would have been writing the last less is more post for me posthumously if it had caught me in the head.)

As the neon green ball exploded off his bat towards me, I had the rather disconcerting feeling that (a) the ball was heat-seeking, (b) I really should be moving out of the — (c) “Mother@#$#$, that hurts!”

The ball blasted into my forearm, which I had moved to protect my chest. (Both the home plate and first base umpires later told me that it looked like I had gotten hit in the throat as my arm flew upward upon impact.) I saw Josh at home plate, shoulders lifted up into his neck, grimacing as if he had felt the impact himself. (For all I know, there may have been an actual blast radius.)

The first responder playing third base – presumably one with first-aid training of some kind – helpfully instructed me (once he realized I wasn’t dead), “Don’t rub it! You know you can’t rub it!” This advice, for the uninitiated, isn’t medical. The Code of the Game dictates that when you get hit with a ball you shake it off. Like a real man. (I’m not one, by the way.)

And so, as my forearm quickly swelled up to twice its normal size, I did the only thing I could do. I signaled that Josh’s rocket was a foul ball, prompting a sigh of relief from the crowd, which apparently thought that the poor cripple umping at third was on the verge of losing another limb. (Lest you think the first responders were of no help at all, one of their players, felling sorry for the wounded third-base umpire, slipped me a cool silver patch. I thanked him and put it in my pocket with the one hand I still had that actually worked.)

I did honor the Code, though – never touched my nearly-shattered arm with my other hand.

3: if you REALLY get hurt, you want to know guys on the WWAST

As medical staff tried to find me cold packs and ice to put on my increasingly grotesque-looking forearm, one of the WWAST’s players (who shall remain nameless so as not to implicate him) walked over to me and said, “Hey, [player name] has some Vicodin. We can get you half a tab and you won’t feel anything.” I thanked him for his thoughtfulness, but told him I unfortunately had to drive 4+ hours back to New York that night. “Oh,” he said. “Then you probably shouldn’t take that Vicodin.”

2: the WWAST takes no prisoners

After falling behind 3-0 in the first inning, the WWAST outscored the first responders 28-8. Shortstop Matt Kinsey and the aforementioned Josh Wege both dented the Green Monster. (After Kinsey hit a warning track shot in his second at bat, I told him, “You got that one.” He shook his head, “Nope – didn’t get all of it.” After he deposited the ball halfway up the Monster in his next at bat I said, “You were right, you didn’t get all of the last one.” He grinned – “I got ALL of this one.”)

1: what happens after is the best part

After Kyle Earle made a fantastic running catch in the gap to end the game, the WWAST spent a solid 30 minutes hanging out with the first responders, signing autographs for all the fans, and taking photos. Greg Reynolds, an upper extremity amputee, stepped away from the small legion of friends who had come to see him (he’s a Massachusetts kid) and asked me how my arm felt.

Just for a minute, put yourself in my shoes. What the hell do you say to an Army vet who lost his arm in Operation Iraqi Freedom when he asks you about the arm injury you sustained.

When you got hit.

The Correct Answer, if you’re confused, is, “It’ll be fine. No problem.” The alternative – [anguished voice]”It really hurts. You have no idea how much pain I’m in!” – is a non-starter.

Best part of the night for me?

I cornered Josh Wege after the game, got him to sign the ace bandage wrapped around the bag of ice on my arm, and we took a photo together. And that picture captures what makes the WWAST special. Whether they appreciate it or not, they’re incredible not because they beat the snot out of able-bodied teams (again and again), but because they connect very different kinds of people to each other. 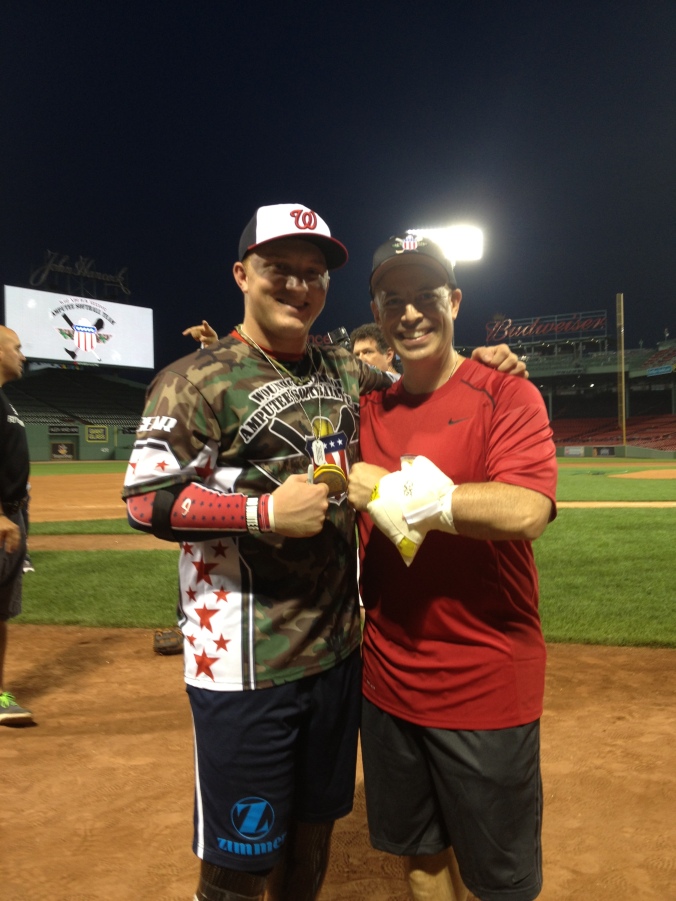 The Wounded Warrior and the plain ol’ wounded

Feeling cynical about the country we live in?

Take in a WWAST game and stick around afterwards. The coolest thing? You don’t need to go to Fenway Park to experience that.