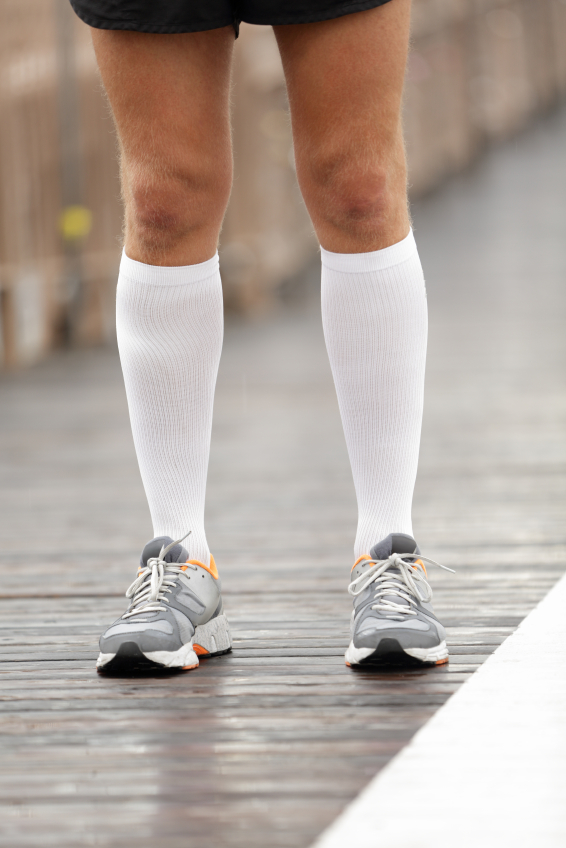 Far be it from me to offer fashion advice. I am one of the most fashion-challenged individuals you’ll ever meet. But when it comes to commenting on prosthetic fashion, I do believe I can speak with some credibility. And I’m going to limit my 1000 word harangue this week to a seemingly small prosthetic fashion faux pas, but one that forces me to shake my head every time I see it: pulling your socks high up over the prosthesis. It’s an unforgivable sin in my extremely short fashion primer, but for those of you who don’t live, eat and breathe both prosthetics and fashion, humor me as I give you some important background information.

First, this fashion advice doesn’t apply when you’re wearing long pants. If the prosthesis is fully covered, neither I nor anyone else cares a whole lot about your sock style choices. Go crazy. Knock yourself out. Wear different colored  socks on your prosthetic and sound sides; wear a sock on your sound foot and none on the prosthesis; or do the opposite. Wear them high or wear them low. (This sounds perilously like a Dr. Seuss amputee style guide: “Upon the fake foot you can wear red or blue/polka dots or stripes will both dazzle under that shoe/Pull the socks high or wear them low/Cool off those dogs by cutting a hole for your big toe/(Don’t be ashamed – be proud, let it show)”.)

Second, for those of you asking why bother with wearing a sock over the prosthetic foot at all, the answer is simple and relatively banal: it’s difficult to get a shoe over a somewhat “grippy” rubber foot shell. A sock makes it much easier to slide shoes on and off the prosthetic foot. So there! With this two-pronged prologue in mind, now permit me to rant.

My fellow amputees, my brethren: when you are wearing shorts and proudly baring your prosthesis for the world to see – i.e., not wearing a cosmetic cover of any kind – why exactly do you need to pull your sock up to dangle limply against the prosthetic pylon? Men especially – you don’t want to ever wear anything where the words “dangle” and “limply” could be used in conjunction with each other to describe what’s showing.

Everyone makes fun of septuogenarians who wear their white socks pulled up as high as their arthritic hands and gravity will permit. So why, dear God, why do amputees from 25-50 insist on perpetuating this known fashion atrocity? Is it because they think that pulling up the socks as high as possible will detract attention from the prosthesis? There are about 73 things wrong with this possible explanation, but allow me to touch on just a few.

First, your sock never covers enough of the prosthesis to actually hide it. In fact, white socks – which seem to be disproportionately favored by the missing limbed – often serve to accentuate the difference between a “normal” piece of clothing and the (often) black titanium it’s covering.

Second, wearing your socks high attracts attention, whether you’re able-bodied or not. Think about runners you now see jogging around with compression socks that run up their leg to just below the knee (see photo at the top of this post). My good friend Scout Bassett insists that these compression socks are the greatest thing since the invention of electricity. She may be right from a performance standpoint. But I have informed her in no uncertain terms that I would rather get hit by a car again than don those ridiculous looking things. If the Tarahumara don’t need compression socks to run 30 miles a day through Mexican canyons, I think I can survive just fine on the brutal terrain of suburban Long Island wearing socks that top out around my ankle. If knee socks look awful when you’re running – and let’s face it, runners are the same people who voluntarily wear tank tops and short shorts together, so looking awful in that context is roughly equivalent to being told that you don’t have  strong enough lyrics to open for One Direction – think of how truly dismal they look when worn this way with regular clothes.

Finally folks, I’ve got bad news for you: if wearing your socks high (a) doesn’t cover your prosthesis and (b) attracts attention, you’ve combined the worst of both worlds by opting for (a) and (b) simultaneously. Let me pretend that I’m the average able-bodied person and give you a sneak peek into their mind as you walk by them looking like this:

What’s the deal with the white socks up to your neck there, big guy? Looking sharp in a Larry Bird rookie year kind of way. Wait a second, why is that sock flapping around like a flag in a stiff breeze? Oh – he’s got no leg. Quick, look away! Can’t stare at that. [Three seconds elapse] Must. Look. Back. Dude, props to you for the whole rehab thing, but the sock. Oh Lord, the sock? You’re not a starting midfielder for Barcelona, my friend. Yes, now I’m staring at you. And I know you think it’s because you have a prosthetic leg. But it’s not. It’s the sock, dude!

Look, I’m a guy who buys almost exclusively grey and black shirts so that I don’t have to worry about matching them with whatever pants I have on. A daring fashion statement from me consists of combining brown dress shoes with a dark gray suit. I actually buy magazines like GQ and Esquire when traveling for the articles. But please, for the love of all that’s holy, listen to me: do not, ever, under any circumstance, pull your socks way up over your prosthetic pylon while wearing shorts and think for a second that you look ok. You don’t. You look awful. And when you see people staring at you as you walk by, don’t blame the able-bodied world for its inability to do anything but stare at “disabilities”, mouths agape. Look down. If you’re wearing your socks high, the disability people are staring at isn’t the one you think it is.