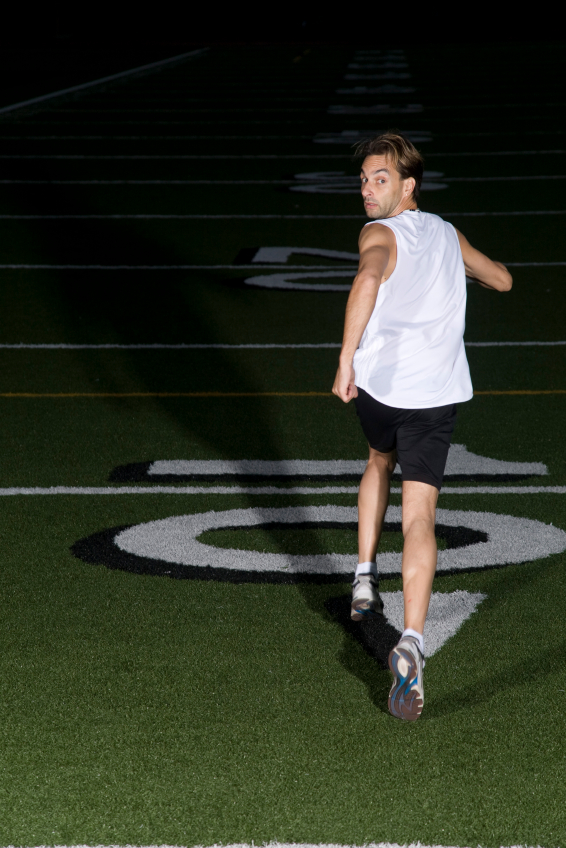 This is why I don’t like running in events.

The 10-mile leg of the San Diego Triathlon Challenge that I volunteered for in a moment of temporary insanity is just over a month away. You might think that at this point I’m regularly logging 5-7 mile runs with a nice 8-10 miler planned for the beginning of October.

That would have been the smart way to prepare. It is not what I have done.

A few weeks ago I thought I was on track. I could knock off 5 miles so long as I jogged at the pace of your average tree sloth. I knew that the speed would come with just a few more weeks of regular running at this distance. I was confident that I’d be able to safely ramp up my distance so that I was in the 7-9 mile range at least a few times a week by the beginning of October.

Then life interrupted. Our house, which we had put on the market at the beginning of the summer, sold. In the space of just over two weeks, we needed to (a) pack our entire home, with a decade’s worth of junk in it, (b) find a new place to live, and (c) move into said new place. While we pulled off this difficult trifecta, stacking that on top of work was all-encompassing. Mix in  business trips to Akron/California – don’t ask; NY to Cleveland to Houston to Long Beach isn’t my idea of a fun cross-country jaunt – and Seattle into that 15-day time frame and the possibility of running disappeared almost entirely. (I think I did log a 3 mile treadmill session in California, but that was it.)

I thought I’d get on track last week at least. I faithfully brought my running leg with me to Boston, where I was attending a large industry convention.

On Wednesday night I didn’t get to bed until 1 AM. I had secured a training partner who was flying in from the West Coast and we confirmed that we’d meet at 6 AM Thursday morning. I awoke at 5:30 feeling like I’d been hit by a train. When my partner texted me with the news that she hadn’t fallen asleep until an hour earlier due to jet lag, it seemed like a valid basis for pushing running back one more day. We agreed on the same time Friday AM.

Unfortunately, I ended up working on a presentation that I and two peers from work needed to deliver on Friday night. I sent the updated presentation to them at 3 AM, Friday morning, quickly followed by a text to my running partner advising her that I couldn’t run on 2 hours sleep and then function for the entirety of the next day.

So Saturday morning seemed like a possibility. But then I had the opportunity to have dinner Friday night with two veterans, including Saul Bosquez of the Wounded Warrior Amputee Softball Team. By the team we all got to the restaurant it was close to 9 pm. By the time I got back to my hotel room it was pushing midnight again. (To my credit, I know my limits. Saul and Jay, in true military style, hunkered down and went out after dinner. I was smart enough to know that trying to keep pace with them would end badly for me.)

So, to summarize, between Wednesday and Saturday, I logged a full 14 hours of total sleep time. This is not conducive to an early morning run. Perhaps an even more depressing statistic, however, is that from the time I arrived in Boston on Wednesday night until Sunday morning, I didn’t make it outside to breathe outdoor air once.

I drove back from Boston Sunday morning and returned home not to run, but rather, to break down 43 more moving boxes that Cara had emptied in my absence. For the first time in close to a week, I got a full night’s sleep.

For those of you keeping count, that means I’ve basically been a non-runner for a little over 3 weeks.

Staring down the barrel of a 10-mile gun, yesterday I showed the tiniest hint of self-discipline and run some undefined distance in some unmeasured amount of time. (I’ve not yet figured out any running routes near our new home, so this is currently a “make it up as you go along” exercise.)

As I dragged myself upstairs to shower I learned that a friend of mine from work, Axel, happened to be in town on vacation. Axel is a talented athlete who, about 18 months ago, decided that he was going to become a triathlete. And so he did. (Axel once told me that his favorite part of doing triathlons is completing them (quickly) and then sitting in a chair and smoking a cigar while other, less fortunate souls, stumble across the finish line.)  We met in town for lunch and after getting through the normal business-related chatter, I admitted to him that I had this 10 miler looming and that I was “[expletive deleted]”.

After laughing at my colorful description of my race readiness, Axel stared at me intently and told me that focusing on running distance at this point was a mistake. Trade distance for volume, he advised. In other words, run distances that I can handle more frequently than normal. While I already knew this intellectually – since running distances your body isn’t trained for is a primary cause of injury – hearing it from Axel meant a lot. In fact, I had been planning on doing just the opposite: running 2-3 times per week at longer distances (starting around 5 miles and working my way up from there).

Armed with Axel’s advice, I’m now locked in. I’ve got 40 days. I’ll be running 4 times a week between now and then, handling distances I’m currently comfortable with while gradually ramping up my speed. And I will trust that the less (distance) is more approach to running will pay dividends come October 21.